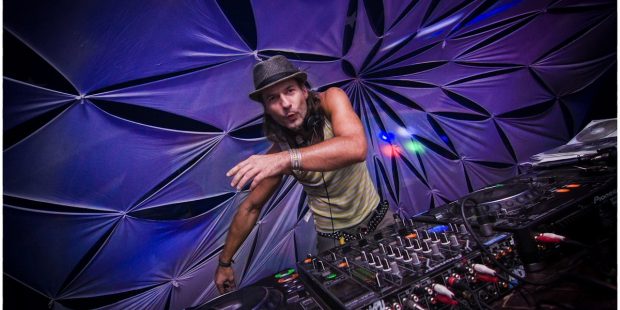 Caban was born in the 70´s and has been influenced by psycedelic(rock) music like: pink floyd , Gong, Ozric Tentacles, Led Zeppelin, iron butterfly and many more since being a child. He fell in love and still is in love with this kind of music.

Later in his life he discovered african and world music and got addicted to syhntie sounds from kraftwerk ,and the “neue deutsche welle”. He started to collect all these kinds of music on vinyl and when he finally had his 1st mixing pult and 2 turntables, he put the tape in and pressed recording and at once knew something special just happend to him – he now was a “DJ” . This all took place in 1989. A few years later he had his first gigs in pubs and clubs. Counting the years until today – its all in all 27 years of being a DJ and musician and dancer. In his early days Caban also discovered his skills in playing percussions, and went to several music and percussion schools an played with several live-bands and live-acts.

He used to play “live percussions” often under the nickname “SHAMANICDRUMS” in many clubs in all kind of different styles – from arabic, to classic and jazz, funk, soul, electro and many more. Back then he also found his real and true love – psytrance – and started his dj career with his dj name “CABAN”. In 2002 he also started producing his own tracks – from chillout, to morning psytrance and progressive music.

Caban is a human soul – a percussionist, producer, DJ and live-act and dancer – everything combined along the lines of “music is connecting people”. Cabans Dj-sets are from ambient to chillout, from minimal to psy – from progressive and psychedelic trance to full on and Forest Style. Furthermore he supports sets with percussions.